Menorca at a glance

Menorca may be known as the smaller of the Balearics Islands, but if you’re seeking a delightful combination of beauty and tranquillity then size doesn’t matter.

The gorgeous dot in the Mediterranean has earned global appreciation and you discover why when you experience the gorgeous beaches, enchanting coastline and protected countryside. The way it has remained so unspoilt after decades of tourism has helped Menorca obtain prestigious biosphere reserve status from Unesco, the United Nations Educational and Scientific Organisation.  See this article for more Unesco heritage sites.

Yet Menorca still has marvellous attractions for tourists who want a little bit more than undiluted peace and quiet.

The two main towns of Mahon and Ciutadella are bursting with atmosphere as well as shops, pavement cafes and history. They both have charming old quarters and picturesque harbours.

There is a scattering of beautiful resorts with stunning sandy beaches in bays and coves often at the end of deep gorges carved out long ago by rivers, now extinct.

More than 100 beaches are tucked away on this croissant-shaped island that is only 30 miles from end to end.  There are plenty of water sports to enjoy on a sea that can be breathtakingly crystal clear plus three water parks for families.

A marvellous bridal path follows the entire 115-miles of the magically diverse coastline and is one of many walking, hiking, cycling and horse-riding trails.

Menorca loves horses. They are the stars of the festivals held by every town and village on their summer saints’ days, and the friendly locals do like to party. If you want a music bar or club then they are there to be found.

Inland there are intriguing stone ruins from when people were living on the island three or four thousand years ago. There are hills, but no towering mountains. The highest point is Mount Toro, just over 1,000ft above sea level, and at the top are a convent, a large statue of Jesus of the Sacred Heart - and fantastic, panoramic views.

On a clear day you can see Menorca’s bigger, noisier, sister, Majorca.  But the little sister certainly packs a very big punch!

Where to stay in Menorca 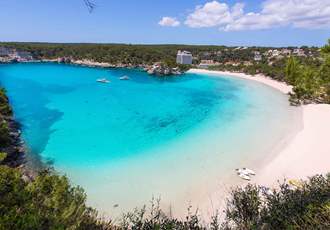 The resort of Cala Galdana is situated on the beautiful south coast of Menorca approximately 25 miles from Mahon airport. 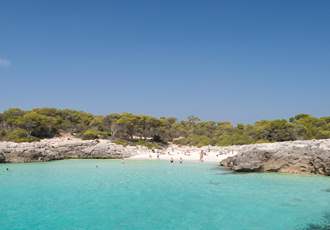 Perfect for families and couples looking for a more upmarket resort, which has plenty to offer in terms of activities and sandy beaches. 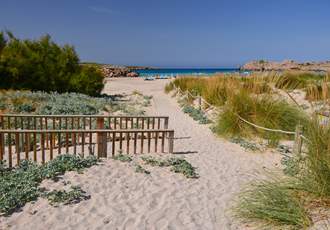 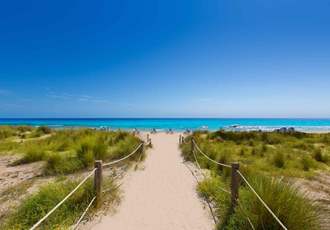 The extremely popular family friendly resort of Son Bou is set on the west coast of Menorca. 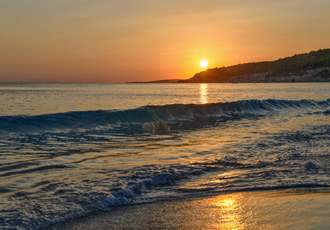 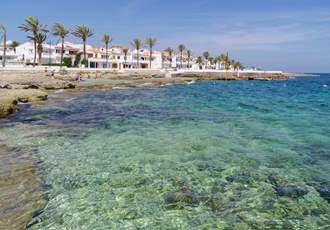 The S’Algar residential estate is one of the most relevant tourist centres of the island. It is located on an outlet along the south coast of the island.

Cala Santandria is located on the west coast of Menorca, only a few kilometres south of the old capital of the island, Ciutadella. 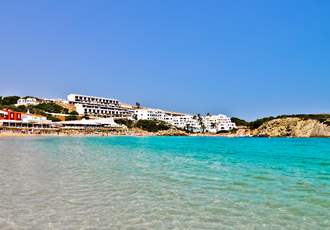 The warm shallow waters of the bay make this resort very popular with families with Baby & Toddler children. The beach is without doubt a major attraction of this resort with fine, clean sand and a good variety of water sports and other facilities availabl… 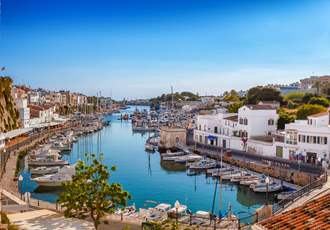 Sophisticated Ciutadella is Menorca's second city, on the west coast of Menorca. Once the capital, until 1722 when it is moved to Mahon during British rule, it remains the religious centre of the island.   The city celebrates the San Juan fiesta (called Sant… 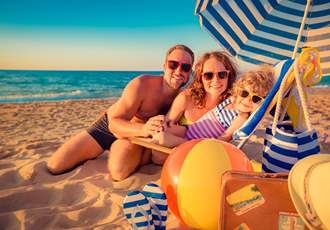 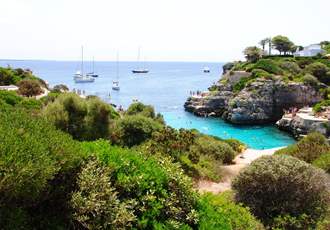 Cala en Blanes ( or Cala'n Blanes ) is part of collection of more recently established mini resorts along this coastal stretch and is the one with the largest beach. L 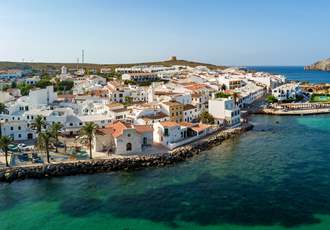 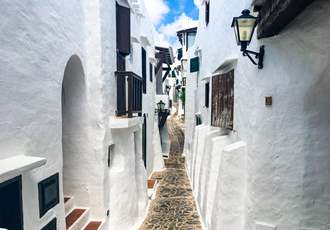 An old traditional Menorcan Fishing village located on the north easter coast of Menorca in an area of outstanding natural beauty. 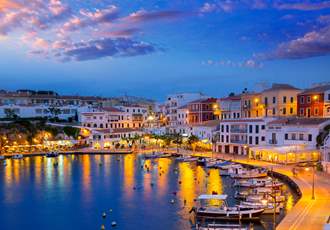 Mahon's city centre has a lovely atmosphere with pavement Cafes Bars, a maze of narrow streets with attractive architecture and many reminders of its Georgian past 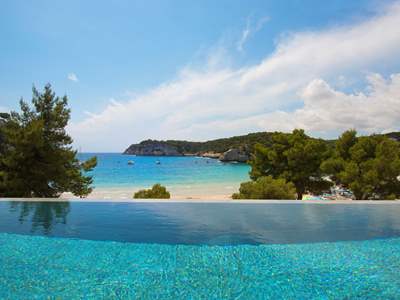 In the peak summer months of June, July and August the sun shines for about 10 hours a day and the average top temperature is in the high 20 degrees Centigrade. It sometimes soars well above 30 degrees, but heatwaves are tempered by welcome sea breezes. It rarely rains in these months. The wettest months are in autumn and winter.

There’s plenty of sun in the shoulder months of April, May and September when it will still be warm enough to enjoy the beach and countryside, although another layer of clothing may be needed in the evenings. The sea temperature is 20 degrees or higher in from June to October.

If you visit Menorca between 23 June and 8 September you are likely to experience a “jaleo” festival. They are colourful and exciting events that are much enjoyed by tourists, but they date back more than 500 years. Each town and village holds a fiesta to celebrate its patron saint’s day - and the stars of the shows are pure-bred Menorcan horses and their riders.

The beautifully decorated black horses are paraded through the streets and the horsemanship skills are demonstrated by tricks performed to traditional music from flutes and drums. Sometimes they will race along the streets too. The jaleo is when the horses rear up and balance on their back legs. Then the parties begin. Restaurants set up street stalls, there is often live music, dancing, a funfair and sometimes fireworks.  Special jaleo buses are laid on day and night so people can get to – and from – the festivals.

Menorca has an international jazz festival in April and there are several jazz clubs and bars open across the island throughout the summer.

In May, hundreds of athletes take part in a series of six races on the coastal path that goes all around the island. The toughest event is the full 115-mile marathon.  Also in May, Mahon holds a four-day floral, art and cultural festival.

To seek out some of the wonders of Menorca it’s best to rent transport. There are buses but having a car, scooter, cycle or boat will enable you to get to places that public transport doesn’t reach.

Car hire. There aren’t any motorways on Menorca. The major road, the ME1, runs the length of the island and connects Mahon with Ciutadella.  There are numerous car hire businesses. Road signs are in Catalan and Spanish.

Buses.  Bus terminals in Mahon and Ciutadella act as hubs for the island’s bus services that reach most of the towns, resorts and villages. There are three regional bus services and each one has a website, with English translation, which provides routes and schedules. Mahon and the east coast are covered by TMSA; Ciutadella and the west coast by Torres; the north east by Autos Fornells.

Taxis: The main resorts have cab ranks. Available taxis will stop if hailed in the street. They can be booked online or by phone and hotels and restaurants will usually be happy to make the call for customers.  There are water taxis in some resorts.

Boats:  All kinds of boats can be hired from small motorboats to speedboats so visitors can explore the coast. Luxurious yachts with a captain in charge can also be rented by the day.

Cycling and walking: Tracks made when horses rather than motor vehicles were travelling around Menorca have been renovated as walking and cycling trails. The well-signed Cami de Cavalls track follows the entire 115-mile length of the coastline. Tourist offices have guidebooks and maps for walkers and cyclists. There are numerous cycle hire businesses that rent mountain bikes, road bikes and E-bikes (the electric ones) by the day or week.

Land train: The Mahon Express road train takes passengers on a 50-minute trip around the city, or longer if they choose to hop on and off at set points. There are no conventional railways on Menorca. 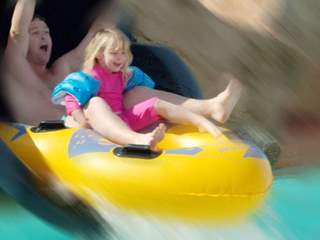 Spend an unforgettable day at Menorca's original water park.  It's fun for the whole family with exhilarating water attractions such as the Kamikaze, 2-seater Black Hole, 90m Adventure River, giant slides and tunnels as well as fun for the younger adventurers such as water castle, jacuzzi and mini-chutes. 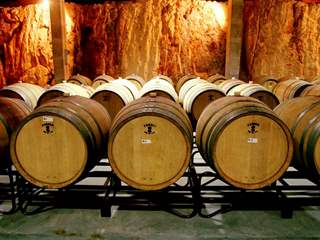 Menorca wine is well regarded and you'll see it on the wine lists of the top restaurants on the island.  Now you can visit one of the leading bodegas on the island - Binifadet.

Menorca has the largest number of Bronze Age ruins anywhere in Europe. We explore three in our guide to the Mystery of Amazing Ancient Ruins on Menorca.