Ibiza at a glance

Yes, it’s the island that showed the world how to party to the pulsing rhythm of electronic dance music. But it has a lot more to offer.

There are quiet coves tucked beneath rugged cliffs, peaceful hamlets, fishing villages, picturesque paths for exploring on foot or bike. And perfect summer weather on an island with about 80 beaches. That’s Ibiza.

And it’s been branded “the White Isle” because the brilliant white buildings stand out against the vivid green trees, the clear blue sky and the turquoise sea.

Yes, that’s Ibiza too - so much packed into an island only 20 miles long.

More than 50 years ago the beauty of Ibiza was enjoyed by beatniks and hippies. Hippy markets are still held every week. Then came clubs and music bars and Ibiza became the place to party. Ibiza clubs have been voted the best nightlife clubs in the world and superstar DJs fly in to take sets.

Yet away from the club scene other destinations dotted around the lovely coastline are ideal for traditional or family-friendly holidays.

For instance, the white sands of Talamanca are only 15 minutes from Ibiza Town but much more peaceful. And Santa Eulalia has a palm-lined prom, a wide beach, charming town, great shops, lots of restaurants and a riverside walk to an original Roman bridge. That’s Ibiza.

Where to stay in Ibiza 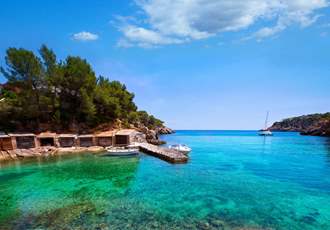 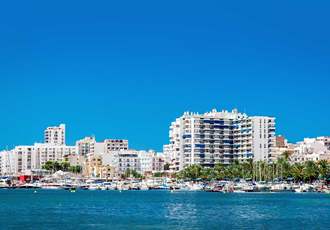 San Antonio Bay benefits from being close to the lively atmosphere of San Antonio Town but away enough to be able to relax if one wishes. 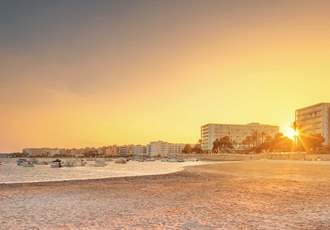 San Antonio holidays are firm favourites for British tourist and many returning year after year. 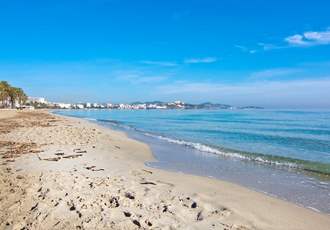 Playa D'en Bossa is one of Ibiza's most popular resorts boasting the longest stretch of beach in Ibiza.

Cala Llonga is an attractive, sheltered east-coast bay with a lovely sandy beach. It's a family focused resort everything on beach activities, accommodation and restaurant are geared towards making sure families have a fabulous holiday.

Small resort in the beautiful north of Ibiza offering peace and quiet as well as lots of family fun with lots of great water activities. 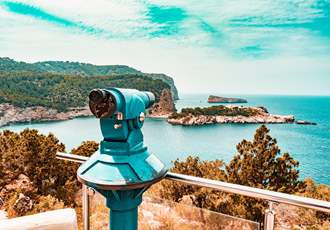 Puerto de San Miguel has a broad sandy beach protected by the surrounding cliffs. A favourite for families and also popular with peace seeking couples. 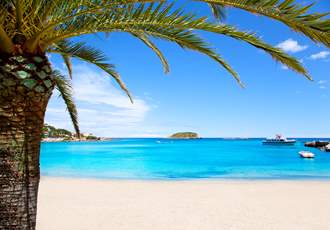 Choose Es Cana holidays for a relaxing holiday by day, sprinkled with some lively bars in the evening. A great choice for Adults and families. 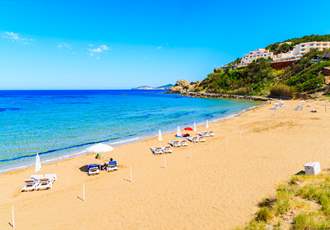 This small area which features 200m-long sandy beach provides a great quiet resort away from the normal loudness of Ibiza's other resorts.

S’Argamassa is ideal for holidaymakers looking for quiet beaches and a relaxed family atmosphere, all within easy reach of cultural and recreational attractions.

Is it true that Ibiza has the world’s top club?

Hi Ibiza in Playa d’en Bossa came top for the second year running in 2019 in a competition run by the International Nightlife Association to find the world’s best club. The annual competition is held to celebrate “excellence in nightlife”.  Entries were received from 34 countries.

What language is spoken in Ibiza?

Both Spanish and Catalan are official languages on the island.  Ibicencan is the local dialect of Catalan which you will hear spoken in Ibiza. Road signs are in Catalan, so Ibiza becomes Eivissa. However, it is a multi-cultural, multi-lingual holiday island where English, Spanish, German, French and Italian are widely spoken.

Is the tap water safe to drink in Ibiza?

Yes – and no! Ibiza’s tap water comes from underground rainwater lakes or from desalination plants that make seawater potable. But it contains high levels of salt or calcium and is heavily chlorinated. People who live on the island and drink it regularly do tolerate it. Visitors usually don’t like the taste and may get upset tummies if they drink too much of it. So why take a chance when on holiday. Use the tap water for cleaning your teeth but use bottled water for drinking – and rehydrating at the clubs. 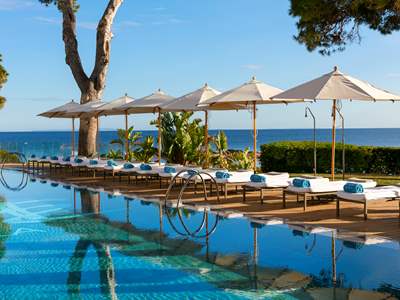 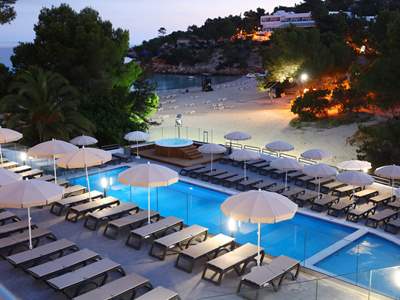 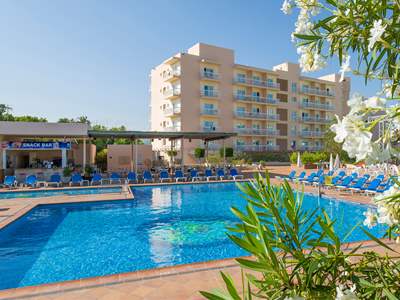 Best Time to Travel to Ibiza

This is an island where there is always so much to do – and the Mediterranean climate can more or less guarantee that the weather will be perfect for it, whatever it is. It rarely rains between June and September and in July and August there will be more than 10 hours of sunshine a day and it will be hot, with maximum temperatures in the upper 30 degrees Centigrade and maybe higher. The evenings will still be warm enough for T-shirts and shorts.

But even in May, June and September the sun will be out for hours and the average temperatures will be in the mid-20s or higher, although a jumper may be needed in the evenings. The sea stays comfortably warm for swimming until October.

A medieval fair is held in the historic walled area of Ibiza Town during the second week of May. Jugglers, artists, puppeteers, craftsmen and musicians are joined by people dressed as dragons, witches, knights and princesses in a lively festival full of colourful and fun.

Ibiza Gay Pride in June attracts 50,000 people from all over the world for four days of drag shows, music, movies, parties and street fun in Ibiza Town. The last day always sees the spectacular LGBT “great march” pride parade. From June 10 to 13, 2020.

Saint John the Baptist celebrations are held all over the Balearics on June 23 to welcome the return of summer, but no one does it quite like the small village of San Juan in Ibiza. The village celebrates its saint with a church service followed by a parade to the village centre where the festival starts. There’s a day of dancing, games, music and feasting. There’s an evening craft market and live music followed by a bonfires and fireworks. Some of the young men do fire walking and bonfire jumping, a tradition that’s supposed to drive away bad spirits. June 21 to 24, 2020

BBC Radio 1 has been hosting a weekend of music and dancing in Ibiza for 20 years in 2020 and has promised that the anniversary event will be bigger and better than ever. Annie Mac, Danny Howard and Pete Tong will be hosting live shows and other events that will feature “new music and hottest DJ sets” from the world of dance. July 31 – August 2, 2020.

Several days of music, dancing, markets, church services and other activities celebrate Ibiza’s heritage, history and culture with the Festes de la Terra in August. There’s a spectacular firework finale at midnight on August 8, St Ciriac’s day, in the port of Ibiza Town.

On August 24 it’s the turn of San Antonio to have a firework finale to end a week of celebrations for the town’s patron saint, Saint Bartomen.

The 12th annual event of an interactive arts festival called Bloop is scheduled for August and September. The project, launched in Spain, promotes the message “art is for everybody”. The free festival includes murals, installations, music, workshops, street art, photographs and sculpture.  The event has so far been responsible for 60 murals and art installations on the island.

There are several “hippy” style markets on Ibiza where visitors can shop for locally made art and crafts, clothes, shoes, jewellery, organic produce and much more - and have their palms read or tuck into an authentic meal while being entertained by live music or DJ.

Car hire: A reasonable road network connects all towns and villages so hiring a car can be an economic way to explore the island. All resorts have car hire businesses and your UK driving licence will be sufficient.  (This could change after Brexit.) Most car hire companies have an age limit of 21 but it can be higher. Drive on the right and seatbelts are compulsory. Main towns colour code kerbs for parking. Yellow, no parking. Blue, pay to park or restrictions in place. White, free to park.  Cars parked illegally are clamped or fined. Most resorts have car parks too, some paid, some free.

Buses: Reliable, air-conditioned bus services are regular and frequent from 7am until 11.30pm in the summer.  Between June and September a “discobus” runs through the night providing links between the clubs, resorts and main hotels. Timetables and routes are displayed at bus stops, in the offices where you buy the tickets and on the Ibizabus company website and mobile app. There is an English translation. In the evenings, when ticket offices are shut, tickets can be bought on the buses. The Discobuses run until 6am.

Taxis: There are taxi ranks in all main resorts and at the airport. Cabs with green lights showing on their roofs can be flagged down anywhere, any time. A list of taxi firm phone numbers is available online but hotels will call or book taxis for guests.  Journeys are metered but drivers usually speak English and will be able to estimate the cost of the journey in advance.

Boats: Water taxis and Aquabuses journey between resorts and beaches. Ferries run to the neighbouring island of Formentera, boats go from resorts to more secluded beaches. Speedboats and small motorboats can be hired (without a licence). A more luxurious yacht can be hired along with a captain to do the steering.

Other vehicle hire:  Quad bikes, scooters, mopeds, motorcycles and bicycles can all be hired in the main resorts and provide opportunities to explore the island, including the bits that cars and buses can’t reach.  Quad bikes require a full driving or motorcycle licence. You must be 18 or over to hire a bike with an engine bigger than 75cc.  Helmets are compulsory. Ibiza has become a popular destination for cyclists and a wide range of road and mountain bikes is available for hire.

Excursions: If you want someone else to take the strain out of travelling then there is a huge range of excursions available. You may want to spend a day on a party boat, or a wild Safari or buggy off-road adventures, or a glorious tour around the whole, enchanting island.  Then there are guide-led walking tours around the towns or in the countryside or focused on culture or food. If you fancy pedalling, there are  cycling or E-bike (electric ones) tours with guides too. Or you could take the train.

Trains: No, Ibiza doesn’t have a railway - but it does have tourist land trains. They take passengers on road trips through towns and countryside and offer sights of “the real Ibiza”. They operate out of Sant Eulalia and San Antonio and there is a full commentary in the open-air carriages. Stops can be in villages, beaches, viewing points, markets and sometimes a vineyard for wine-tasting.

Are Ibiza's clubs the best in the world?

Ibiza's clubs have won many awards over the years. Read our low down on the clubbing scene in Ibiza.