Canary Islands at a glance

Why are the Canary Islands different?  Yes, they’re volcanic. They are like Mother Nature theme parks with amazing beaches and breathtaking scenery.

So why are they different?

Because the joy of the sub-tropical climate means that all these things and more can be enjoyed at any time of the year. And they are only four-hours from the UK.

If you’ve been there already, then we hope to tempt you to go back again, maybe to somewhere different. Each island has its own magnificent character.

If you haven’t been before here’s what to expect on the five islands you can visit with Olympic Holidays.  How can you resist!

Where to stay in Canary Islands 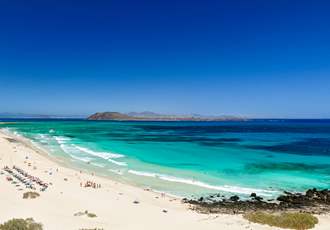 Welcome to the three-in-one desert island that promises you a fantastic holiday any time of the year.  Fuerteventura is the second largest Canary Island, but it is only 60 miles from the brilliant-white sand dunes in the north to the seemingly endless golden s… 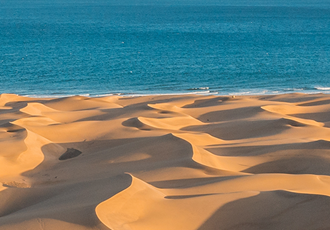 Gran Canaria has a kind of magic. You can soak up the sun on a beach and then marvel at the view from a snow-capped mountain.  There are miles of desert-like sand dunes and waterfalls in lush forests. Some atmospheric towns and villages have stepped from hist… 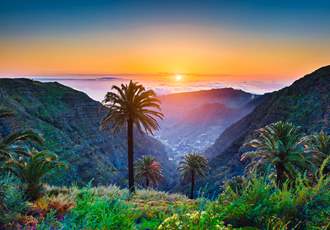 Welcome to La Isla Bonita! (The Beautiful Island.) With its sugar and banana plantations and laid-back Spanish culture, La Palma feels more South American than European. Maybe the Caribbean isn’t as far away as you thought! The lush landscape, enchanting for…

Black sand, a sleeping volcano, breath-taking scenery, fantastic food and marvellous facilities for tourists. No, not Santorini but Europe’s other amazing volcanic island: Lanzarote. One big difference between these two holiday ideals is that this unique Cana… Why do two million people from the UK choose Tenerife as a holiday destination each year? Is it the fabulous beaches, stunning scenery, breath-taking volcano and tremendous amenities? Yes. But there is one more crucial consideration. The wonderful weather. T…

Top Hotels in the Canary Islands 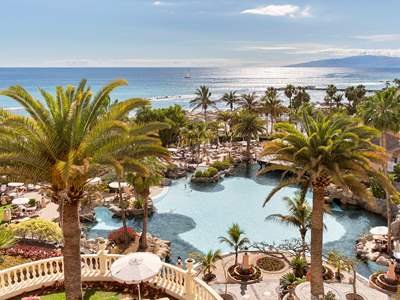 As in the UK, the weather in the Canary Islands is variable. But whichever island you are on and whenever you are on it you can expect it to be a lot warmer and drier than at home.

They may be little more than a four-hour flight away, but the islands enjoy a sub-tropical climate that makes them great for a holiday at any time of the year.

Winter temperatures are mild enough to sunbathe on Christmas Day with maybe six or seven hours of sun and the thermometer nudging 22 degrees. Although the Atlantic may be warm enough for a dip the temperature will be much lower on the hills and mountains where, sometimes, it snows.

In the summer it rarely gets uncomfortably hot. The sun can shine for up to 10 hours a day, but maximum temperatures are usually between 25 and 30 degrees Centigrade.  Between May and September, it rarely rains on the coast.

The average annual rainfall for the Canary Islands is less than 150mm a year. London has almost four times as much. It may rain in Tenerife for 14 days a year but London has more than 100 wet days. Micro-climates mean some islands have wetter and drier areas.

Car hire:  Road networks are good on the Canary Islands and car hire is popular and widely available.  Drivers must be over 21 and should carry with them in the car picture ID (like a driving licence or passport) and the car hire document. Drive on the right.

Taxis: They operate on all five islands and fares are regulated. Most drivers speak English so you can discuss the fare before you travel. Expect fares to climb if your journey takes you outside the town or resort you are in. Flag a cab, go to a rank or book by phone (your hotel will help).

Buses:  Reliable and regular bus services run on all five islands. The routes, timetables and fares are available on-line and in English for some islands. Discounts can usually be obtained for multiple journeys.

Ferries:  Hydrofoils and ferries link all the islands.

Take a 4x4 journey into the wild

There’s a limit to where cars and buses can go on the island of Fuerteventura, so go the extra mile on a safari. 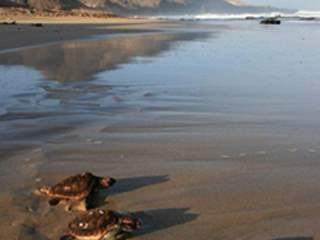 Tourists can support a Fuerteventura conservation project that is battling to save the endangered leatherhead turtle. And don’t miss the sperm whale! 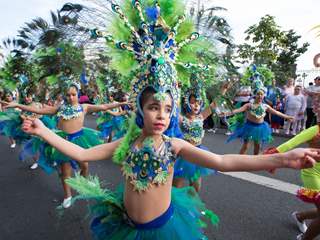 Once upon a time Gran Canaria decided to have a carnival. Now it’s a non-stop spectacular of music and colour that parties day and night for weeks - if you have the stamina. 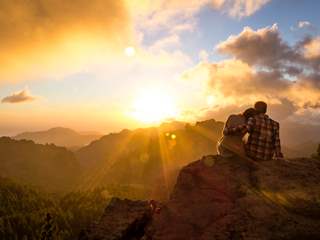 Don’t forget your camera if you walk to the impressive "Roque Nublo" (Cloud Rock) in Gran Canaria - and look out for the stony monk.

A sea safari provides an exciting chance to see whales and dolphins in their natural environment – breathtaking.

Be a time traveller and enjoy the secrets of La Palma’s strange rock art. 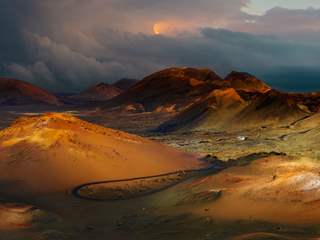 A volcanic eruption shaped Lanzarote and created what has become a global tourist attraction. A visit to the stunning Fire Mountains national park is an unforgettable experience. 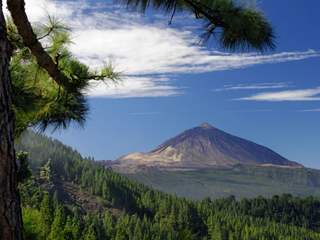 A massive volcanic mountain in a spectacular park provides an unforgettable day out.

An atmospheric food market in the capital city was the setting for a Masterchef contest.

Tenerife’s stars twinkle like no other and the world watches.

Are the Canary Islands named after the birds?

Are all the beaches in the Canary Islands black?

Definitely not. The islands are famous for their very many beautiful white and gold sand beaches and sand dunes. However, there are some stunning black or dark-coloured beaches to be found on all these volcanic islands. Most of La Palma’s beaches are black.

Are the Canary Islands in Africa or Europe?

Geographically they are closer to Africa, Fuerteventura is less than 70 miles from Morocco. But the islands have been Spanish since the 15th century. They are part of the EU and the euro is the currency.

The huge variety of private spas on offer in the Canary Islands stunning. New treatments, a world away from the traditional head massage and manicure, make full use of the many natural resources found in the region. Read our guide to some of the best spas in the Canary Islands.