On the northern side of the Cyclades islands, between Mykonos and Andros, Tinos is one of the most captivating Greek islands with beautiful sandy beaches and traditional villages featuring marble white architecture. It’s Greece as it used to be.

The island has a tradition of marble sculpting and there are more than 40 pretty villages with white and marble buildings on hillsides, mountains and alongside quiet bays. Take a tour to explore Komi, Ktikados, Volax, Krokos, Falatádos, Istérnia and, of note, Pyrgos, known as the sculptors’ village, near marble quarries in the north. It has a lovely square with a handful of bars and cafes.

Tinos is also a religious destination and the Panagia Evangelistria Church is visited by thousands of pilgrims every year. Be sure to wear appropriate dress when visiting this sacred shrine.

Koumaros and Agápi are also must-see villages with unusual arched passageways while Tarambados is rather magical with a number of beautifully ornate dovecotes which look like mini fortresses. Dovecotes are a special feature of Tinos and a legacy of the Venetians; they are scattered across the island and were originally used for pigeons which provided meat and fertiliser.

For walkers, the interior offers superb trails, including hikes to Xóbourgo plateau with its old fortress and Kechrovoúni monastery near the village of Steni with fine views over the island. A three-hour hike from Myrsini to Livada beach follows a tree-shaded ancient footpath shaded by trees past waterfalls and pools.

Beaches on the south-east coast include Blue Flag Agios Fokas, one of the longest on the island. It stretches the length of Agios Sostis town, which has plenty of bars and restaurants while Agios Ioannis and Kionia on the north coast are also popular. Kolimbrythra, next to Tinos town, has received TripAdvisor’s Travellers’ Choice 2020 and here there are two beaches, both excellent for swimming and surfing.

Food lovers will also be more than satisfied on Tinos where there is so much seasonal produce such as wild artichokes and mushrooms, sun-dried tomatoes, capers and chickpeas. With many visitors from Greece the restaurant menus are truly authentic. Look out, too, for locally produced honey to take home the taste of Tinos! 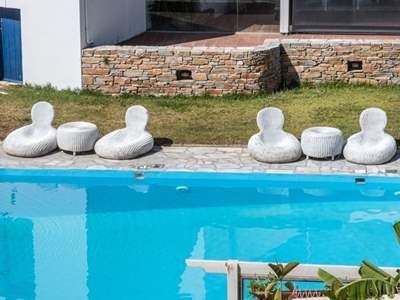 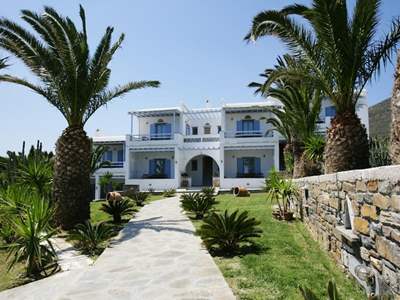 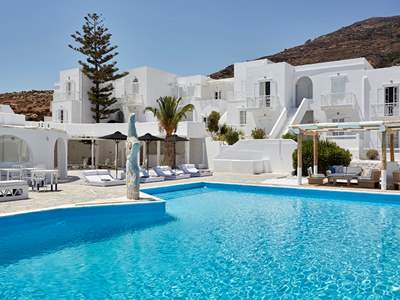