Majorca at a glance

Why is Majorca rated as one of the best holiday islands in the world? And why do so many people go back there, time after time, after time? Here are some of the reasons.

It’s a gorgeous package of things that people love to see and do when they’re on holiday – and for those who love the sun, the weather’s perfect too.

There’s an enormous mixture of beaches, including long stretches of beautiful white sand and sheltered coves. Some are busy and organised; others quiet and secluded. Some claim the island has more than 200 beaches.

With the warm Mediterranean lapping those beaches it’s no surprise that such a wide choice of water sports is available. There are also three water parks.

Such a range of towns, resorts and villages too.  From Palma, the vibrant, historic and cultural capital, to the three coves of Calas De Mallorca, each with a Blue Flag beach.  From the buzzing clubbing mecca of Magaluf, to the lovely beach and marina of historic Alcudia.

And more. The peaks and verdant valleys of the Sera de Tramuntana mountains are the rugged backbone of the north-west coast, so stunning they have world heritage status. There’s a breathtaking train journey into the mountains.

Dine on a vine-decked terrace under the brilliant stars and enjoy mouth-watering cuisine from international and local menus with Majorcan wine.

For those who want something livelier there are clubs, discos and music bars in some resorts that keep going through the night. Majorca likes to party.

What else? Well, it’s great for cycling and golf and, as the home of Rafael Nadal, for tennis. On an island that has been occupied by Phoenicians, Romans and the Moors there is masses of history with ancient castles, monasteries and churches to visit.

For some, the highlight is the towering Gothic cathedral in Palma. And there are dramatic caves that just might have been the inspiration for Jules Verne’s Journey to the Centre of the Earth.

Majorca is certainly a place that has inspired magical journeys for millions.

Where to stay in Majorca 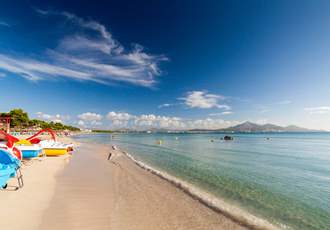 The resort of Alcudia is situated on the north east coast of Majorca and is approximately 1hr 30 mins transfer time from the airport. 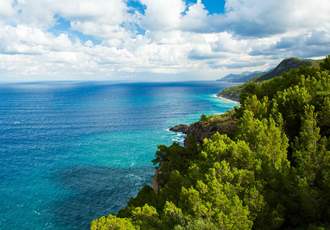 Cabo Blanco is a headland in the southeast of the island with a fabulous sweep of bay backed by thick pine forest. 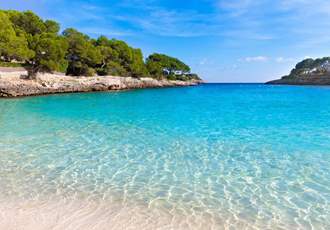 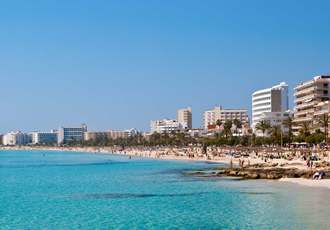 The resort of Cala Millor is located on the attractive east coast of Majorca, approximately 40 miles east of Palma and the airport. 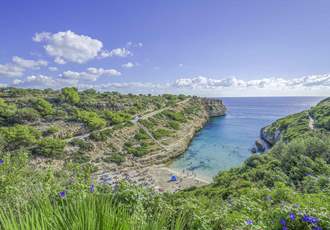 The resort of Calas De Mallorca is set on the eastern coast of Majorca and is approximately a 60 minute transfer time from the airport. 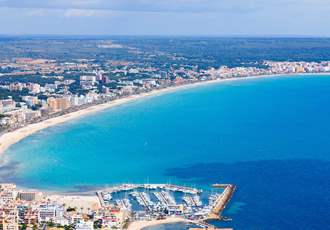 The resort of Ca'n Picafort is located on the north east coast of Majorca approximately 60km from Palma and the airport. 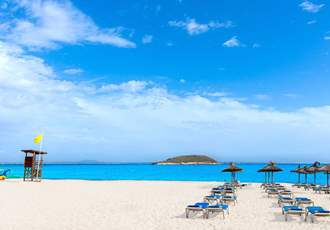 Magaluf is without doubt the liveliest, most popular resort in Majorca for young British holidaymakers.

Although considerably quieter than its more boisterous neighbour Magaluf, this is still very much a lively and bustling resort.

Fulfilling all the wishlist features for a perfect family holiday, Sa Coma is an attractive, modern resort. 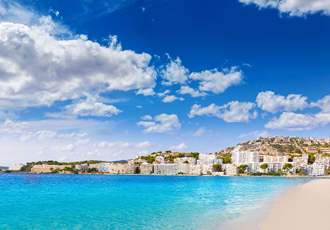 The resort of Santa Ponsa lies on the south west coast of Majorca approximately a 30 minute transfer time.

Playa de Muro is a beautiful long Blue Flag, white sandy beach in the north of Mallorca and one of the longest in the Balearic Islands. 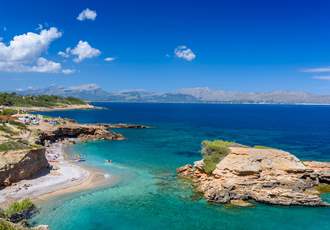 S'illot is a very pleasant beach resort, with just enough amenities for a relaxing holiday. The resort has a lovely promenade that runs right through it, lined with palm trees, and with a fair selection of bars, restaurants, cafes and shops. 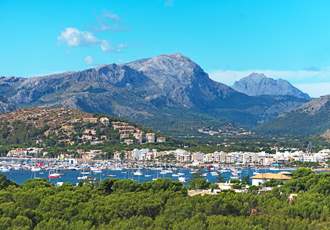 This resort has everything - wonderful scenery, beautiful sandy beaches and a laid-back friendly atmosphere. The sheltered horseshoe shaped bay is set against the stunning backdrop of the Tramuntana mountain range. 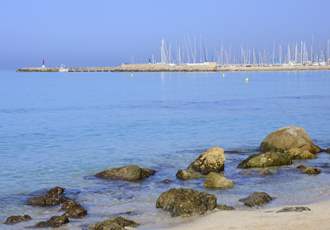 C'an Pastilla is an attractive beach resort located to the east of the Bay of Palma, Mallorca. It sits next to the capital of the Island Palma. The resort is pretty relaxed and suits families and those looking for a more laid-back beach resort. 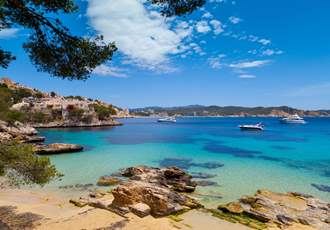 Paguera is a modern tourist resort in the south west of Majorca, in the district of Calvia. 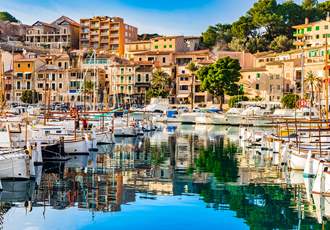 The town of Sóller in the northwest of Mallorca became wealthy because of the valley’s abundant citrus groves. 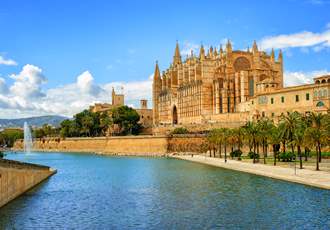 Palma is Mallorca's vibrant capital, stylish and intimate, yet bursting with life. Half of the island's population dwells in this city, lively all year round with hotels, restaurants, cafes, shops and nightlife.

El Arenal has plenty of facilities along it's stretch of this fabulous sandy beach, which has Blue Flag status. 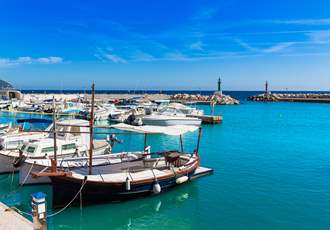 On Majorca's east coast, Cala Bona is traditional a relaxed fishing town that has plenty of Spanish charm. 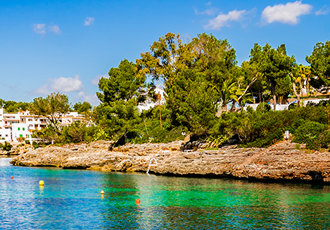 Porto Petro or Portopetro can be found within the district of Santanyí. This fishing village which retains much of its traditional charm, with most of its buildings, developed in the early 20th century, being handsome, colourful houses with authentic Mallorcan…

Top Hotels in in Majorca 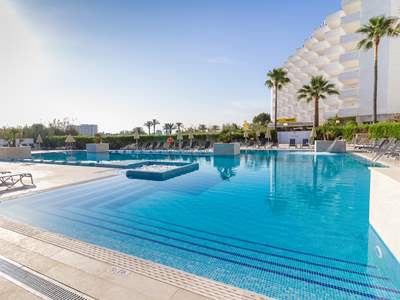 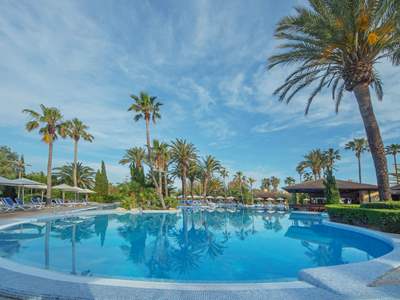 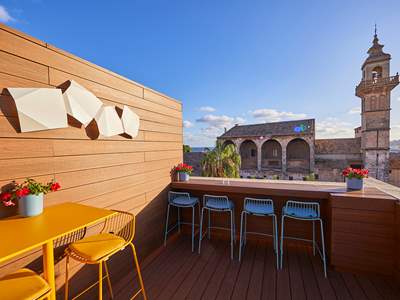 Like the marvellous Majorcan attractions, the Mediterranean climate is also perfect for holidays. In June, July and August the sun will be shining all day, the average temperature will be in the mid-20s Centigrade and rain will be so rare it’s hardly worth mentioning. The hottest part of the day is likely to see the thermometer creep above 30 degrees.

In May and September the average temperature will be plenty high enough to spend hours on a beach most days. There could be a bit of rain. The island enjoys mild winters, January and February still have about 170 hours of sunshine per month. The wettest months are in the autumn and winter.

There are festivals and other events in Majorca all year round. All the towns and villages celebrate their patron saint’s day with music, dancing, processions and services. Here are some of the highlights:

Carnivals are held across the island early in March and just before the start of Lent. The main event is in Palma where there are carnivals for children, in the morning, and adults in the evening. The carnivals are followed by a huge fun fair that opens every day until Easter.

Processions to mark the Passion of Christ are held across the island at Easter. Thousands watch the event in Palma where brotherhoods in penitential robes carry religious statues through the town. Palm Sunday processions are also widely held to mark the beginning of Easter week.

The anniversary of a 16th century battle when the Moors were prevented from invading Majorca is celebrated every May in Soller. There’s a re-enactment of the battle in the port, a victory celebration in the town square and lots of dressing up, music, dancing, noise and chaos!

People dressed as peasants and devils join musicians, floats and others in processions to celebrate Santa Catalina Thomas, one of the island’s beloved religious figures. Festivals are held at a number of villages, including Santa Margalida (first weekend of September), Vilafranca de Bonany (end of July) and Valldemossa, where she was born (July 28).

An unusual horse festival is held on August 28 in the remote village of Ses Salines. It’s the only Majorcan village to celebrate the “jaleo” tradition from the neighbouring island of Menorca. The horses parade, jump and do tricks in the town square to the beat of local folk dances. The event is followed by a party.

The small town of Binissalem in the heart of Majorca’s grape-growing district has a nine-day party to celebrate the harvest in September. Expect plenty of wine-tasting and eating as well as carnival-type processions, traditional music, grape-treading and even grape-throwing competitions.

Car hire. One of the best ways to explore Majorca’s huge number of attractions is by car. The extensive road network is generally well looked after, and signage is good. There are numerous car rental businesses in every resort. You must be at least 21 to hire a car. Driving is on the right.  Parking zones are designated by blue lines and some zones have meters. There’s a mobile phone app for blue zone parking in Palma.

Buses. The island-wide bus services are praised for their reliability, cleanliness and reasonable prices. They call at most resorts, towns and villages. There are bus stations in Palma, Inca and Manacor. The Majorcan Transport Consortium (CTM) has a comprehensive web site which includes bus stop locations, times, fares and a route map. There’s an English translation.

Trains. There are two train routes, both starting from Palma. One runs through the mountains to Soller and goes in 13 tunnels, across a long viaduct and through such beautiful scenery it has become a favourite excursion for visitors. A tram then continues the journey to the coast and the Port of Soller. The other train route goes across the central plains to Inca. More details on the CTM web site, referred to above.  There’s also a metro service between Palma and the university.

Taxis. They’re common in the towns and resorts, less so in more rural areas. If there’s a green light showing on the roof they can be flagged down. The cabs can hold up to seven passengers.  Fares are all controlled and metered. A list of charges and supplements will be displayed in the vehicle.

Water taxis. Lots of resorts have them. Some provide a bus-style service between resorts others will take customers to more secluded beaches and coves.

Boats. They can be rented in the busier resorts and a variety of types are available - small motorboats, speedboats, sailing boats. They are popular because they enable customers to explore the coastline at their own pace. Luxurious yachts, with a captain at the wheel, can also be hired!

Bikes. Majorca has a reputation as one of the best road cycling destinations in the world. The added attraction is the wide range of cycling routes which makes the island suitable for novice riders as well as professionals. There are the toughest mountain challenges and off-road coastal paths perfect for family outings.  Unsurprisingly there are numerous places where you can rent all kinds of bikes. There’s a free bike hire service available in some Palma car parks. It’s called Aparca y Pasea and full details are online. 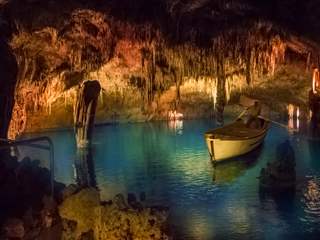 Fancy a visit to the centre of the earth while on holiday in Majorca? Then visit the dark and dramatic Caves of Drach near Porto Cristo in north-east Majorca. The four caves link together and are big enough to contain one of the largest underground lakes in the world. 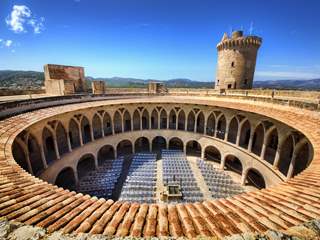 Unique Bellver Castle is the only round castle in Spain. It has a moat with a drawbridge, three towers and a keep. But those attractions are unlikely to be the lasting memory.

Why Palma was voted best place in the world

It has a captivating old town, a trendy nightlife quarter, great shops and restaurants, an enormous cathedral, ancient castle and a royal palace. Palma, the capital of Majorca, really does live up to its nickname of the pearl of the Mediterranean.  Read our article about Why Palma was voted best place in the world.