Ithaca at a glance

Ithaca! The very name transports you to an ancient world of mythology and legend. But this is a myth you can visit!  Famed for being the homeland of Ancient Greek hero Odysseus, Ithaca today is a romantic, rugged island perfect for people who want to find a relaxing but entrancing place for their holiday.

Situated just off the north-east coast of Kefalonia, Ithaca is almost two islands. The north and south ends are connected by a strip of land 600 metres wide. It is the second smallest of the seven Ionian Islands with a population of just over 3,000 people.

The stunning scenery of this mountainous island attracts many visitors who either pull on their walking boots and explore or simply sit back in a taverna or kafenion (coffee house) and enjoy the views and the tranquility.

In the south is the capital, Vathy, a small, picturesque town of just 2,000 people nestled in a sheltered bay perfect for mooring boats.

In the north are small villages and numerous secluded beaches. This is the Greece of old, unspoiled by tourism with clusters of simple stone houses and groups of locals just shooting the breeze.

The western part of the island is dominated by the towering peaks of Mount Aetos but the east is flat and, thanks to generous winter rains, is green and covered with trees. There are olive groves, vineyards and a host of orange and lemon trees. Oak trees, cypress trees and beautiful wildflowers such as poppies, anemones and cyclamens decorate the mountain slopes.

Although much of the island was rebuilt after a devastating earthquake in 1953, there are ancient treasures hidden away to help bring Ithaca’s history to life. Strict building regulations have ensured that new building is in harmony with the Ionian style. There are no large or high-rise developments.

Ithaca is just 18 miles from tip to tail and with a good road network that enables you to explore the island by car or, if you want to, seek out the most secluded beaches. Jump in a jeep and go off road!

Ithaca charms its visitors with a laid-back atmosphere, the perfect blue of the surrounding Ionian Sea, the lush green of the forests and incredibly welcoming locals. For peace, seclusion and beautiful scenery, Ithaca is very hard to beat.

Where to stay in Ithaca 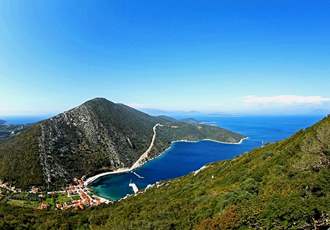 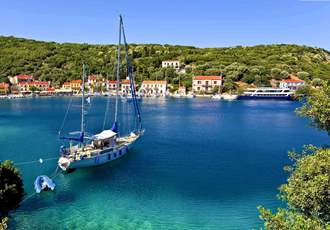 Vathy, has been the capital of the island since 16th century and has a population of approximately 2,000 people.

There is no airport on Ithaca, so how do you get there?

As there is no direct flight to Ithaca, you reach the island by boat – a very fitting way to get there. Don’t worry, the journey won’t take the 20 years it took the king, Odysseus, to return there. The flight to Kefalonia takes about three-hours-20 minutes. Then there is transport to the port of Sami and a ferry crossing to the small, picturesque port of Pisaetos on Ithaca which takes about half an hour.

As Ithaca is an Ionian island like Corfu did the Durrells ever go there?

The eldest son, the author Lawrence, did. In his 1978 book The Greek Islands he writes about the friendly people, the knobbly hills and the beautiful entry into Vathy harbour. “Whatever the puzzles and problems of ancient history in Ithaca there is something attractive, even bewitching, about the little island,” he wrote.

Are there any ATM cash machines on Ithaca?

Yes, there are three banks with ATMs in Vathy, the capital, and another in Stavros. ATMs are fairly common in main towns and resorts in Greece, although they may be hard to find in rural areas. They accept debit cards from most major credit card companies. Many machines have an English language option. Major credit card companies have an ATM locator on their websites.

Sometimes the ATMs are in a room outside banks, but ATM cards will open the locked door. Banks in Greece tend to be shut in the afternoons and at weekends. Bank cards aren’t always welcome, and travellers' cheques are no longer widely used.  Some banks are now reluctant to accept them although currency exchange offices will take them if they are in euros.

Top Hotels in in Ithaca 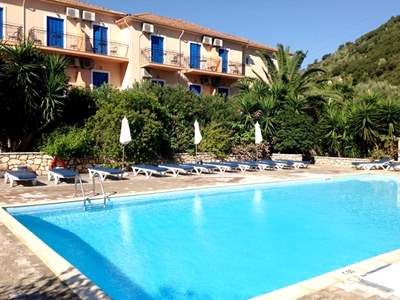 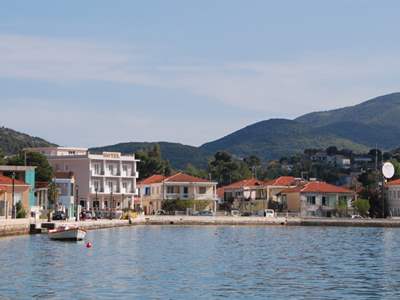 It's no secret that Greece has one of the best summers in the world, and in Ithaca summer starts in May and finishes in October.

In July and August the sun can beam down for 12 or 13 hours a day and the temperatures may soar above 30 degrees Centigrade. A cooling breeze is often there to help. In June and September the thermometer will still be in the mid-20s during the day and the evenings will be warm enough to eat outside.

It hardly ever rains in the peak period of summer. The wettest months are from November to February.

Throughout the summer the villages hold Festivals of the Panighiri, centuries old celebration of their patron saints. The day always begins at the local church and is followed by live music, food, local wine and lots of dancing!

Ithaca’s Festival of Theatre, in May, is a contest for plays that are being performed for the first time. The Unification parade, also in May, is when the Ionian Islands celebrate their unification with the rest of Greece.

In July Kioni celebrates two saints’ days with feasts, traditional music and dancing. On the 20th there’s a service at the remote church of Agios Elias followed by celebrations in the village. Four days later Saint John is celebrated in the village with a church service and another banquet.

Stavros, the second largest town on the island, celebrates the Festival of the Saviour with two days of live music, food, wine and dancing for two days early in August. It’s considered to be the island’s biggest festival.

A community wine festival takes over the small mountain village of Perahori for one evening of music, eating and drinking in August. The party goes on until the wine barrels are empty.  Villagers in tiny Anogi take over serving wine and barbequed food for a feast on August 14, the eve of the Day of the Virgin Mary, one of the biggest religious celebration in the country.

Car and scooter hire: A good road network links the capital, Vathy, with almost every village on the island. There are some steep and twisty roads and some beaches that can only be reached via dirt roads or boat. Cars and scooters can be hired in Vathy. Alternatively, cars can be hired at the Kefalonia airport and taken on the ferry to Ithaca.

Bike Hire: There are some excellent opportunities for off road biking on Ithaca and a full range of bikes can be hired from Vathy.

Taxis: In summer, sea taxis are a popular choice for travelers seeking a tour around the island or a trip to some of the more remote beaches. There are 12 regular taxis that can be booked by phone.

Buses: During the tourist season, a bus service operates every day from Vathy to the villages of Lefki, Stavros, Platrithias, Frikes and Kioni. Times vary.

Boat hire: Small, easy to use boats can be hired in Vathi and Kioni to discover the secluded coves tucked away in the most remote corners of the island.

Ferries: The ports of Vathy and Pisaetos have ferry links with Kefalonia. In the summer, a ferry runs between Frikes in northern Ithaca to Lefkas. There are also daily ferry links between the Peloponnese and Ithaca.

Excursions:  For such a small island there is a wide choice. Boat trips, coach trips, taxi tours, walking tours, mountain hikes, forest walks, cultural trips, island safaris on foot or by Jeep and vineyard visits. Guided tours can be booked for individuals or private groups. The guides speak English. There is an excursion to the uninhabited island of Atakos.