Kalymnos at a glance

It seems impossible to pack so much into such a small space. But Kalymnos does it with great style.

It’s known as the sponge fishing island because harvesting sponges from the sea once made Kalymnos rich. Sub-aqua diving is still a big sport there.

It’s a rock climbers paradise too because rugged cliffs and rocky mountains challenge expert climbers from all over the world. Four mountain ranges dominate the island – and it’s only a dozen miles long and eight wide.

So how come it’s such a gem for tourists who want to relax rather than dangle from a cliff or dive with the fish?  Here’s how.

Marvellous scenery that includes valleys green with grapevines and orange groves, thermal springs, caves and even a Scandi-style fjord that cuts through the mountains at peaceful Vathy.

Brilliant beaches such as the sands at lively Masouri, one of several beaches with sunbeds, sunshades, cafes and an exciting range of watersports. There are plenty of more remote, secluded and lovely coves tucked into cliffsides and hills too. Wherever they are, there is the warm, clear, deep-blue and inviting Aegean Sea.

Amazing history - the remains of a sanctuary that was a place of pagan worship for more than a thousand years; a clifftop medieval castle; the ruins of a fortified mountain village abandoned in the 18th century.

Picturesque Pothia, the port and stylish capital, unfolds as the ferry from Kos approaches Kalymnos. A bronze statue of a mermaid welcomes visitors ashore. The white-painted houses, some of them 19th century mansions, sweep up the hillsides behind a big, friendly town full of atmosphere, interesting shops and family-run tavernas.

A museum tracks the rise and fall of the island’s sponge fishing business which made Kalymnos an affluent Greek island in the 19th century. A sponge-killing disease and the arrival of synthetic sponges destroyed the trade. Some fascinating sponge fishing still goes on and scuba diving is a hugely popular activity with expert help available for beginners or experts.

But diver or not, the joy of Kalymnos is it invites everyone to dive deep into its many delights.

Where to stay in Kalymnos 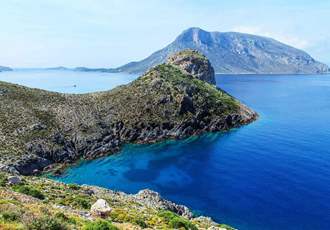 Compact, scenic and surrounded by rock, Masouri is popular among climbers, walkers and rest-seekers. 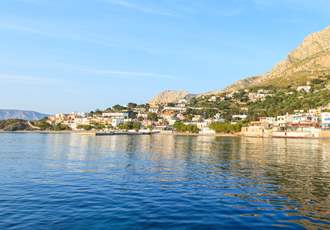 Who is the Lady of Kalymnos?

She is a larger-than-life bronze statue made more than 2,000 years ago and dredged from the Aegean Sea by a fisherman in 1994. The woman, wrapped in a full-length dress and holding one hand up to her face, is in remarkable condition. The statue now has pride of place in superb Kalymnos Archaeological Museum in Pothia.

How far is Kalymnos from Kos?

There is a 10 mile stretch of Aegean Sea between the Kalymnos port of Pothia and the harbour of Mastihari in Kos. The voyage takes between 30 and 50 minutes depending on the type of ferry. The drive from Mastihari to Kos airport is about 15 minutes.

Is there a thermal beach in Kalymnos?

Yes. It’s only a few minutes from the port at Pothia and it’s said to be an effective all-year-round wellness treatment. Thermal springs heat the sea to about 38 degrees Centigrade. The water is said to be full of the kind of minerals that assist with rheumatoid arthritis and sciatica as well as general aches and pains. 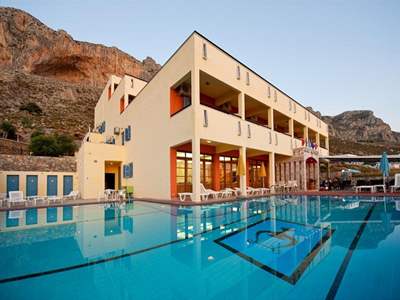 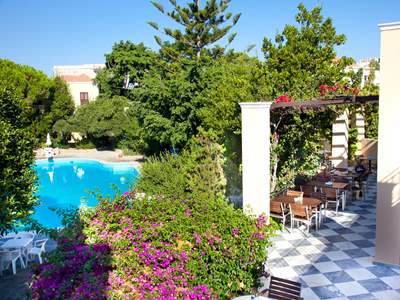 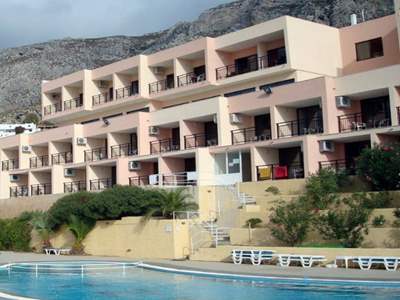 It’s a warm, dry island with a Mediterranean climate which means lots of sunshine and a pleasant breeze to stop it getting too hot. Kalymnos enjoys an average of 300 hours of sunshine for every summer month – that’s May to September.

In July and August the thermometer will be in the low 30s at peak times but the clear blue Aegean Sea will be beckoning - and comfortably above 20 degrees. Even in May and October it should be warm enough to enjoy a meal outside in the evenings.

Very little rain falls between May and the end of August.  The spring and late summer months are popular for hikers and climbers. The months between November and March are the wettest.

There is a rock climbing festival in September or early October and a diving festival in July. Kalymnos is proud of its festivals and its folklore traditions. Here are three of the more unusual ones.

Bonfires are lit on beaches and in town squares on June 24 to celebrate the birth of St John the Baptist. Brave locals jump over the flames chanting a rhyme dedicated to the saint.

A sky-high panigiri, an ancient cultural festival, is staged on the summit of the highest mountain on July 19. The feast of food, music and dancing on 2,200-foot high Profitis Ilias goes on all night. A steep path leads to the summit from the village of Chora.

A festival is held to celebrate the tsabouna, a type of Greek bagpipe. Music, feasting and dancing goes on late into the night in the village of Argos. It happens after the island marks the feast day of St Panteleimon, its patron saint and the saint of healing, on July 26-27.

A network of roads connect most of the resorts and villages and many of the beaches. They may be narrow and twisty in places but the roads make it easier to explore lovely Kalymnos in many different ways.

Hire a vehicle:  Cars, motorbikes, moped, scooters, quad bikes and bicycles can all be hired in Pothia, the capital, and the main tourist resort of Masouri. An appropriate UK driving licence will be sufficient in 2020. Some rental businesses insist on customers having held a licence for at least a year. Some want car hirers to be at least 21 years old. Mountain bikes are also available to rent.

Buses: There’s an inexpensive and regular bus service which covers a large part of the island. A service between Masouri and Pothia runs every hour during the day throughout the summer. The bus stops right beside Masouri beach

Taxis: They are mainly based in Pothia but travel all over the island and some drivers will act as tour guides (in English) if required. A shared taxi service operates between Masouri and Pothia, which reduces the cost if you don’t mind sharing with strangers.

Boats:  Sea buses link Mirties and Masouri with the small traffic-free island of Telendos, about 10 minutes away, and Pothia with Pserimos, another island. That’s a 50-minute voyage. Boats and water taxis run from the resorts to other beaches around the coast. Vessels from canoes to cruisers can be hired.