Naxos at a glance

Beautiful Naxos is a sparkling star in the deep blue galaxy of Aegean Sea islands.  And the enchantment starts as your ferry glides into harbour.

Spread before you are the gleaming white buildings of the old quarter of Naxos Town with a medieval Venetian castle crowning the hill.

But first there is a truly ancient welcome to this historic island - a huge marble doorway, part of an ancient temple to sun god Apollo.

Today, 2,500 years after this gateway was built, sun-worshippers flock to this, the largest of the Cycladic islands which offers so many timeless attractions.

Naxos is said to be lined with almost 100km of beaches, most of them gorgeous soft sand. Tavernas, sunbeds and sunshades are available on many but, despite the increasing popularity of Naxos, there are coves and bays tucked away for those who want to avoid crowds.

The old part of stylish Naxos Town is a hillside maze of stone-flagged alleyways built with twists and turns to deter invading pirates.  Now they are a sheer delight for tourists. Then there is a long, bustling waterfront with a great selection of restaurants and shops.

The island is rightly proud of its great local produce so look out for dishes with home-grown potatoes and locally made cheeses.

There are places to eat and drink in the charming small towns, villages and hamlets dotted across this lovely island.  Seek them out by using the reliable bus service, hire a car or bike or take an excursion.

Whatever you do, snap the classic Naxos moment – as you watch the sun set through the ancient Portara doorway.

Naxos is an island of Greece that can fulfill anyone's appetite. The bigger the island, the more things to do, right? And since Naxos is the biggest island of the Cyclades you will definitely need a whole week to cross out more than half of the things to see & do on your list.

Naxos has high mountains, fertile valleys, lush green gorges, stunning seascapes and traditional villages perched high on mountain tops, where the inhabitants still wear their traditional dress and live off the fruits of the land. Naxos is also home to beautiful old churches, monasteries and Venetian castles coexisting harmoniously with the Cycladic architecture.

Upon entering the port of the whitewashed Chora of Naxos you'll encounter the islet ofPalatiaat its entrance. On Palatia islet the impressive marble gate,  temple of Apollo, “Portara” stands still since the 6th century BC. According to mythology, the god Dionysus met Ariadni there, who had been abandoned by Thesseus.

Chora, the capital of Naxos, whose landmark is an imposing Venetian castle, is an old castle town with stone paved alleys (known as kalderimia in Greek) where you can admire a unique blend of Cycladic and Medieval architecture: mansions with Venetian blazons still decorating their entrances, narrow arched alleys (known as stegadia in Greek), catholic churches and fortifications. 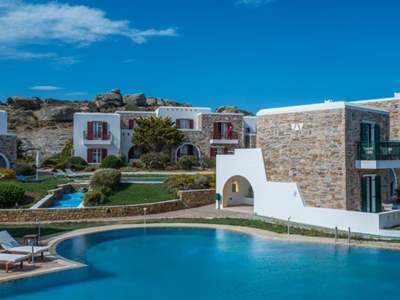 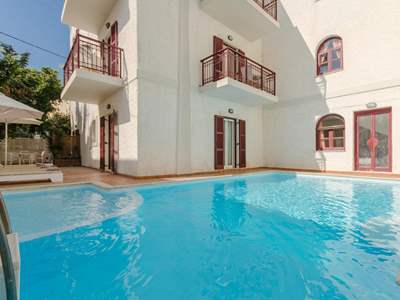 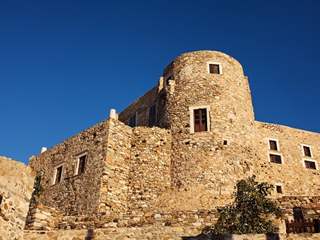 The Castle of Naxos

A powerful castle built by Marco Sanudi in 1207 over the remains of the ancient acropolis. 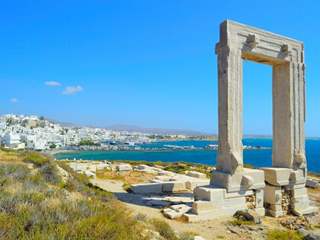 The most famous "door" (porta) of Cyclades, Portara, is one of the most important monuments of Naxos that reveal the island's rich history. 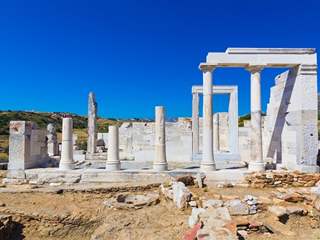 Temple of Dimitra in Gyroulas (Sangri)

The temple of Dimitra is one of the most significant buildings of ancient Naxos and dates back to 520-530 BC. 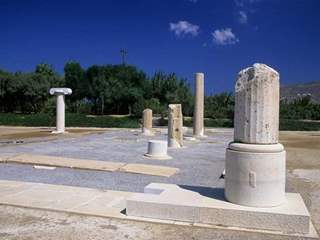 Temple of Dionysus in Iria

The sanctuary of Dionysus is situated in the area of Iria, only 3 kms away from Chora.