Paros at a glance

The stars of the Cycladic Islands are Mykonos and Santorini, holiday gems that people flock to. But Paros is the secret charmer.  It’s green, beautiful and relaxing and Cycladic down to its white-painted houses, blue-domed churches and pretty blue tables and chairs perched on quaysides.

It has about 40 beaches, lots of water sports, an aqua park beside the sea, resorts to chill-out in, tranquil villages, trendy bars and boutique-like shops, a bustling main port with a picturesque old town, loads of lovely tavernas and lively nightlife.

There is a butterfly valley, a mountain, spectacular views of the many islands that surround Paros, quarries that produced flawless white marble for famous classical statues and a marble-paved footpath built a thousand years ago.

So what hasn’t Paros got?  Although it gets busy in peak summer months it doesn’t get the massive crowds of the better-known islands. But the secret of this Cyclades charmer is getting out. Here’s why.

Parikia, the main town, has a traditional harbour, a lovely old quarter of stylish, traffic-free lanes packed with white-painted shops, bars and cafes. There’s an impressive church that dates back to the 4rd century called Our Lady of the Hundred Gates, even though no one has ever found more than 99.

Naoussa, on the north-coast, is chic and beautiful.  At its heart is a labyrinth of lanes full of shops, restaurants, bars and cafes in white-painted buildings and spread around a picturesque little harbour often packed with colourful fishing boats. It even has a partly sunken castle. Naoussa is a great place to be in the evenings.

There are beaches of all kinds, some with fantastic facilities. The lovely, sandy Gold Coast beaches on the east coast have hosted spectacular international windsurfing events. Other beaches are quiet, and secluded.

Pretty Lefkes is a flower-filled Greek village, where the ancient Byzantine Trail provides a lovely countryside walk. There are potters and weavers, a cathedral and a hidden café in Lefkas. One of many delightful finds on a charming island.

How do you get to Paros?

The journey has a breathtaking bonus. We fly to Santorini and then take a ferry to Paros. The ferry sails along Santorini’s volcanic cliffs, dotted with white houses and blue-domed Cycladic churches. It’s the iconic image of one of the world’s most famous islands. The voyage takes between two and four hours depending on which ferry you catch. Sometimes an overnight stop on Santorini is required - and that can be a bonus too!

Why is Paros famous for its marble?

It is brilliant white, flawless and so translucent it appears to glow. It was being used for buildings and sculptures nearly 3,000 years ago and made Paros rich. Some of the world’s most famous classical sculptures are made of what is known as Parian marble, including the Venus de Milo and the Nike of Samothrace.  Napoleon’s tomb in Paris is made of it too. The abandoned quarries can still be visited.

Are there many ancient sites on the island?

The island has been inhabited for 5,000 years and ruins including temples, sanctuaries and castles can be found all over Paros.  The most notable include a cemetery that has been there for 2,700 years, sanctuaries of Apollo and Asciepius, the healing god, from the 4th century BC and an amazing triple church complex called the Panagia Ekatontapiliani that dates back to the 4th century. 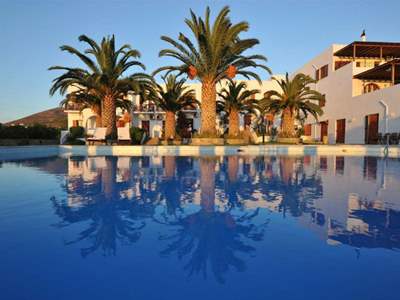 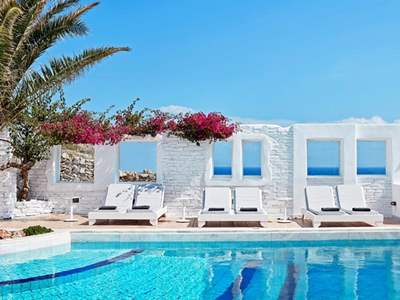 It’s an island full of festivals and the weather helps everyone to enjoy the fun. Go to Paros in July or August and the sun will be shining for 13 or 14 hours a day, the temperature will be heading towards 30 degrees Centigrade. Rain is a summer rarity.

But unlike some parts of Greece, heatwave temperatures are unlikely to be worryingly high because of a welcome cooling breeze. In May, June, September and October there will be more than 10 hours of sunshine per day and the average maximum temperature will be above 20 degrees.

There may be one or two rainy days in October, but the island gets most of its sparse rainfall between November and February.

Concerts, plays and other events are held throughout July and August in an outdoor amphitheatre in overlooking the sea in Paros Park. They are very romantic in the moonlight.

The island enjoys more than 20 religious and cultural festivals throughout the summer and they all seem to involve eating, drinking and dancing!

In June bonfires are lit, Mayday wreaths burned and locals jump over the fires in an ancient tradition to exorcise evil spirits. This custom, known as Klidonas, is supported with a feast and traditional music.

Crowds gather in Parikia for island’s big event, the Feast of the Virgin Mary, on 15 August. There are religious ceremonies and a colourful procession through the town.

On 23 August “pirates” make a mock invasion of the island. It’s a reminder of the dark days when pirates frequently pillaged Paros and took islanders into slavery.  Locals dress up and some come ashore brandishing flares and then charge through the narrow lanes. The defeat of the pirates is celebrated with a feast of local dishes and drinks with traditional music and dancing.

This beautiful Cycladic island is only 13 miles long and 10 miles wide at most and a network of good roads links the town and villages and many of the beaches. It makes exploring more straightforward.

Buses: They are reliable, regular and fairly cheap and seem to go everywhere. There are bus stations in the capital, Parikia, and Naoussa, the main resort. In July and August the buses keep on running beyond midnight.

Car hire:  Rental for cars and scooters is readily available in the main resorts. The roads are paved but some are narrow, steep and twisty.  A vehicle of your own makes it easier to reach more remote and secluded places.

Taxis: There are ranks in Parikia and Naoussa. Taxis can be booked from hotels or flagged down in the street. Fares are fixed.

Water taxis: They regularly chug out of the harbours in Parikia and Nauossa to take visitors to beaches that are otherwise difficult to get to.