Thassos at a glance

A gleaming emerald in a block of brilliant white marble. That’s the hypnotic beauty of remarkable Thassos. Pine forests and olive groves paint the island a lush green as they flow down hillsides to the beaches.

Towering behind the trees are rugged mountains where marble and gold were mined long ago. Jewellery in the island’s fantastic archaeological museum was made of Thassos gold thousands of years ago. And there’s still gold to be found!

Amazing Golden Beach is more than a mile of beautiful sand with sunbeds, sunshades, cafes and a menu of water sports.  It’s one of several lovely Thassos beaches that have won Europe’s Blue Flag award for cleanliness and great facilities.

But if you want to get away from the busier, organised beaches there are many secluded spots hiding away on this circular island in the north-east corner of the clear blue Aegean Sea.

Thassos Town, the capital, was once a city made of the island’s famous white marble. Ancient ruins are everywhere, mixed in with shops and restaurants, a long waterfront, interesting harbour and a good beach. High above the town is an amphitheatre and, above that, the remains of an even older acropolis.

Set off in either direction from Thassos Town and you bump into lovely resorts, villages and beaches. Look out for the sandy beaches of pretty Alyki. Find the natural pool of Giola, a large basin carved out of rock by the sea and full of inviting emerald water.

See the working waterwheel at the olive press in Panagia. Go to Archangel Michael Monastery on the site of a church built by a hermit. Some visit because it has a relic said to be from the nail that fixed Christ’s right hand to the cross.

Explore Theologos, the old capital when the Ottoman Turks ruled. It’s one of several mountainside villages. Some have gurgling streams and fountains and remote Kastro is an almost-deserted fortified village built on a rocky hilltop to keep pirates at bay. Stunning views.

Yes, there are lots of gems to be found on this emerald isle. 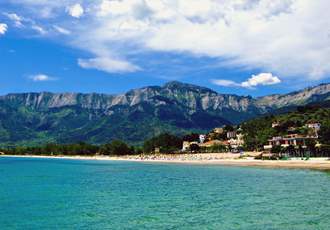 Golden Beach is blessed with an immense tract of pale gold sand that shelves gently into the clean, warm waters of the Aegean. 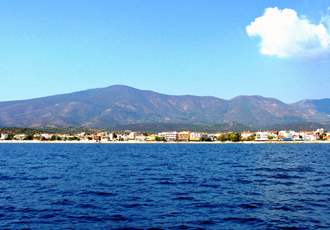 The islands' second largest resort is Limenaria in the south west, a lively village with several restaurants and bars and a couple of discos. 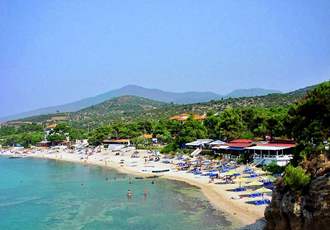 Charming as you like, Pefkari is a compact and captivating resort, sitting pretty among the trees at the edge of a pine forest. 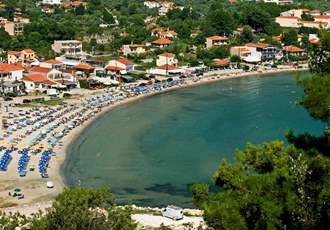 Panagia offers a view across the olive groves, perfect for those who are looking for a quiet resort set in beautiful surroundings. 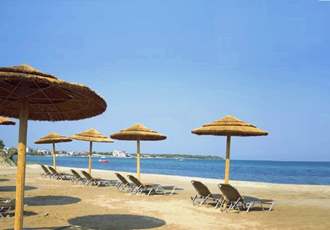 Located on the Northwest coast of Thassos lies the major port town of Skala Prinos. 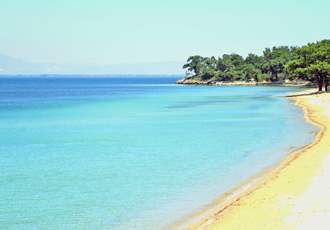 Skala Rachoni is a quiet village and an ideal place for those searching for peaceful and relaxing holidays. 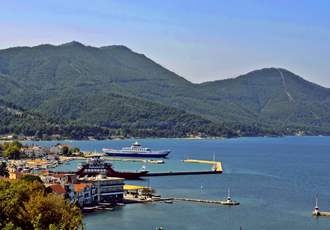 Thassos Town is the capital of Thassos island, and is also known as Limenas. 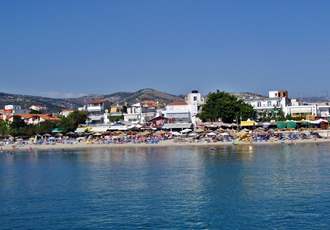 Young families tend to enjoy coming here as well due to the excellent facilities and younger crowds.

With a secluded beachfront location, a contemporary style and nestled in its own Olive Grove, Atrium Beach Thassos offers a relaxing Greek experience. 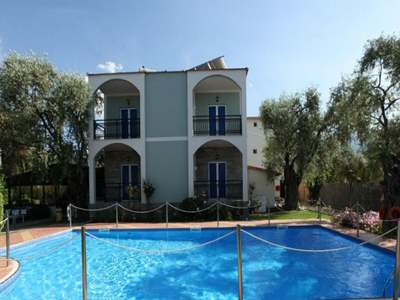 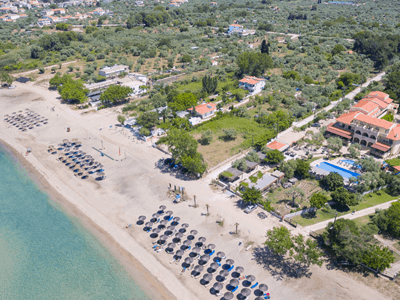 Imagine sitting in an ancient theatre built of marble 2,500 years ago. There’s a fabulous view of the Aegean Sea across the red rooftops of a Greek town. It’s starting to get dark but is still beautifully warm.

Then the theatre comes to life. It may be a costume drama, traditional dances or a concert. But the effect is magical. This is Thassos in the summer - one of the best times of year to be there.

From June to September the island enjoys daytime temperatures that average between 25 degrees Centigrade and 29 degrees. The night-time temperature will stay above 20 degrees – perfect for an evening spent outdoors.

Thassos, the most northerly of the Greek islands, rarely bakes in sizzling heatwave temperatures and it doesn’t have the meltemi wind that blows on some islands further south. Normally, no more than a light breeze will stir the olive trees in Thassos and there is little or no rain in the peak summer months. The sea stays pleasantly warm into September.

From the last week or so of July and throughout August this friendly island stages a series of events that enable visitors to experience the charming culture and traditions that the islanders cherish. They call it the spirit of Thassos.

Concerts, plays, dances, exhibitions, children’s events and art exhibitions are staged at several venues. Some restaurants and bars lay on special entertainment too.

But the ancient theatre on a hill overlooking Thassos Town, the capital, is the centre of activity. National theatre groups, singers and children’s theatrical groups from elsewhere in Greece take part along with the island’s many cultural groups.

Visitors can join locals in “jumping the fire” on July 31. It’s a traditional event that goes on year after year in several villages to welcome the month of August. The purifying power of fire is meant to guarantee health and wellbeing.

Crowds flock to the inland village of Panagia for the Feast of the Assumption on August 15. It starts with an icon of the Virgin Mary being carried around the village – and it finishes with a party that spreads from the tavernas into the streets.

A mock wedding is held to demonstrate and preserve the cultural heritage of the mountain village of Theologos in August. It lasts several days, starting with a demonstration of the bride’s costumes and, of course, ending with a wedding feast.

Getting around Thassos is straightforward. It has well-maintained asphalt roads that reach most of the resorts and villages, including those high in the hills, and a good bus service.  The road that follows the circular coastline is about 60 miles long. There are some steep and twisty bits, but much of it is fairly flat.

Buses:  They run clockwise and anti-clockwise around the coast road, so resorts and beaches are all accessible, and also inland to Theologos, Panagia and Potamia.  The bus depot is in Thassos Town. The services are regular and fairly reliable throughout the summer with eight buses Monday to Saturday and six on Sundays.

Car hire:  Cars, motorbikes, scooters, quads and mopeds can be rented from businesses in Thassos Town, Skala Prinos and Limenaria and some of the other larger resorts. An appropriate full licence will be required.

Taxis: Because of the good road system, taxis cover most of the island. They tend to congregate in the main resorts and are very busy in the peak summer months. Hotels will book cabs in advance.

Fun train:  This road train does day-time tours of Skala Panagia and Skala Potamia, the villages at either end of Khryssi Ammoudia, the golden sands.  In the evening the fun train tours move to Thassos Town.

Hiking and biking:  There are routes, both easy and hard, along the coast, through the olive groves and forests, into the mountains and even to an abandoned village. Cycles and mountain bikes can be hired.

Excursions: There are round-the-island sightsee-and-swim boat trips and water taxis that go between the larger resorts and outlying beaches. Explore villages, ancient sites, museums and more on a Thassos treasures tour. Or go sightseeing off the beaten track on a buggy or 4x4 vehicle.

Ferries: There are several return ferries each day to Kavala and Keramoti on the mainland. The crossings are short enough to allow several hours to be spent on the mainland before returning to Thassos.

How do you get to Thassos?

There is no airport on Thassos. Flights go to Kavala International Airport on the mainland opposite the island. Olympic Holidays offer an optional “taxi” extra which includes taxis and the ferry between airport and the accommodation. There’s a 15-minute taxi ride from the airport to the port at Keramoti and a 40-minute ferry crossing to Thassos Town. Ferries from the port in Kavala take an hour-and-a-half and go to Skala Prinou, the other port on Thassos.

Is there really a beach made of marble?

Yes, it’s a dazzling white beach in a small tree-lined bay on the east coast and it’s made of white pebbles and white sand from when marble was quarried nearby.  Sometimes the sea looks an amazing emerald colour against the marble. Although it’s known – and signed – as “marble beach” its real name is Saliara. There is a car park at the end of an unmade road.

Why does the capital town of Thassos have two different names?